To Order or to Ask a Del Sol Question,
read the Del Sol Order Info and then email Rey Del Sol 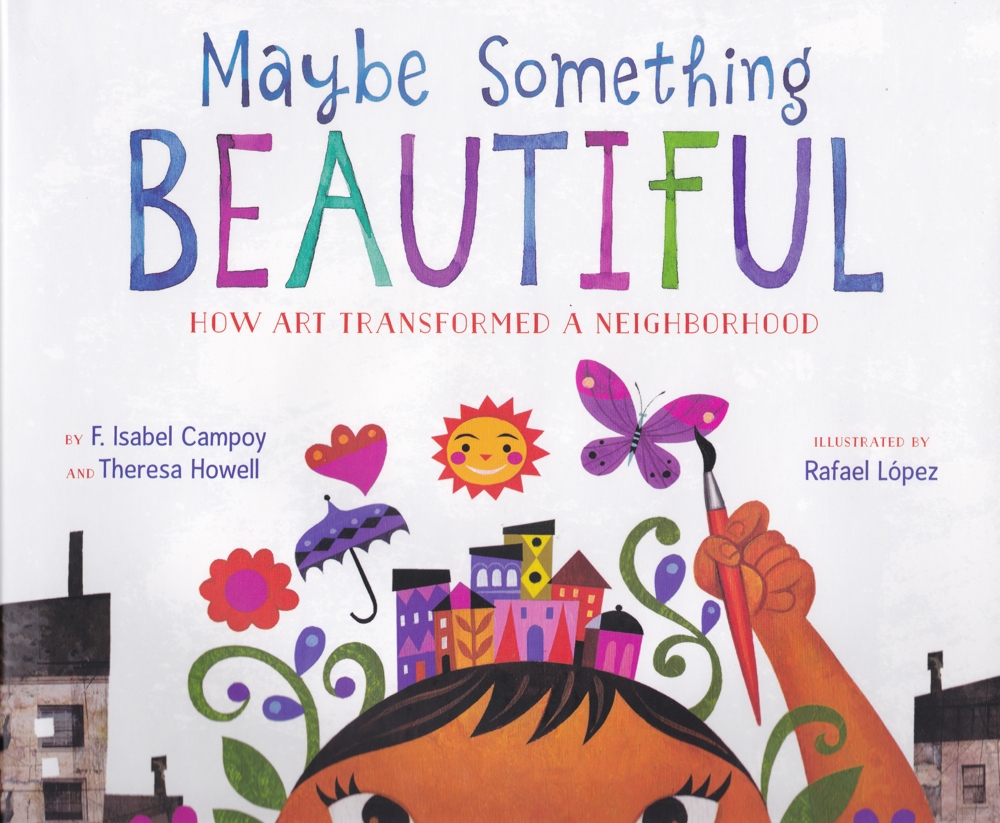 F. Isabel Campoy (Alicante, Spain, 1946) is the author of numerous children’s books in the areas of poetry, theatre, fictional narrative, biographies, and art as well as of pedagogical books in the areas of Language Arts and English as a Second Language. Her work aims at providing children keys to interpret the world in a fun, challenging, and affirmative way. She is a frequent speaker in national and international conferences on issues of Transformative Education, Second Language Acquisition and Authentic Writing.

PERSONAL LIFE : F. Isabel Campoy was born in Alicante, Spain on June 24, 1946, the daughter of María and Diego Campoy, an English professor. She has traveled extensively throughout the world and is fluent in Spanish, Catalonian, English and French. Isabel can translate Italian and Portuguese. She is a student of Arab, and Russian. After receiving a Licenciatura in English Philology at the Universidad Complutense (Madrid, Spain), Isabel pursued graduate studies at Reading University (England) and University of California Los Angeles (UCLA) and the Universidad Complutense (Madrid, Spain).

EARLY LIFE : During her first 16 years Isabel lived in Spain, at a time in which dictator Generalísimo Franco had total control of every aspect of life. To escape from such an oppressive atmosphere she applied for a highly competitive American Field Service Scholarship, which she won in 1963. This granted her the opportunity to live in the United States and study at Trenton High School, in Michigan. That experience changed her life forever. Although she arrived to the States with a fair knowledge of the English language (her father was an English professor in Alicante and patiently requested his four children to speak English at home), the culture she encountered in the States required a profound adaptation and a deep understanding of self and others, here and back home. She learned to observe, to compare and contrast, to analyze and to draw similarities and differences in human beings, societies, beliefs, and ways to see life. Soon she had a world of her own that she learned to translate in order to be part of two worlds. Translating was actually a way to improve her income while studying at the university in Valencia first, and in Madrid later. Every penny was always spent in travels. Knowing other costumes, other people’s way to live life led her first to visit every corner of Spain: Galicia, Cataluńa, País Vasco, Andalucía, Extremadura, País Valenciano, León, Castilla-La Mancha and Aragón. Spain, a country the size of Texas, has four official languages and one of the richest and most varied cultural traditions in Europe. She traveled taking pictures, and taking notes for an encyclopedia of Spain that is 40 years later, still a work in progress. From Spain she extended her trips first to the nearby countries, of Portugal, France, Italy and Morocco, and then the rest of the world. She is still traveling.

CAREER : Isabel worked as the senior acquisitions’ editor for foreign languages in the College Division of Houghton Mifflin Publishing Company (Boston, MA) from 1981 to 1993. Since 1994 Isabel has been an author of several K-6 Spanish Reading Programs for grades K to 6 [Cielo abierto, Vamos de fiesta, Trofeos, Villacuentos, Senderos,Excursiones en California] as well as a Program of English as a Second Language [Moving Into English] all published by Harcourt Brace (now Houghton Mifflin Harcourt). She is the co-author of Gateways to the Sun / Puertas al Sol, a collection of 35 books for children about different aspects of the Hispanic culture. She has edited a number of anthologies of traditional folklore, poetry and plays. Isabel is also the individual author of multiple books. Her extensive writing, of over 150 titles, has been recognized with the Laureate Award from San Francisco Public Library, the Reading the World Award, the Junior Library Guild Award, among others. She is a member of the American Academy of Poets as well as of several organizations for the advancement of multicultural awareness and world peace.

For the first sixteen years of my life I never questioned my identity. I was Spanish, from Alicante, a happy, athletic, gregarious, artistic student. I went to public schools and was a member of sports teams, classical music clubs, and art appreciation classes.  I knew how to manage moving between two languages, Catalan and Spanish, although I couldn't understand why the government wanted to delete all other languages spoken in the country in favor of Spanish only. I knew that by not questioning authority I would be safe, but I couldn't stop questioning all the limitations on freedom imposed by Generalisimo Franco, our dictator. And then I came to the United States. Here I acquired a new identity: I was Latina, at least to English speakers. I was living in Trenton, Michigan, and it was the year 1963. As I reflect on my life as an author, I realize that the more than one hundred books I have published have all been a statement of what it means to be Latino. In a poem (Suni Paz composed music for it) I say:

I realized that there are no Latinos in México or Guatemala, El Salvador or Cuba. There are no Latinos in any of the twenty Hispanic countries; there are Mexicans or Guatemalans, Salvadorians or Cubans. The name Latino has been adopted in the United States by English speakers to refer to the Spanish-speaking population and their descendants in this country. Latinos are, then, a new culture separate from those of their countries of origin - wider, more complex, and in many ways richer. And I wanted our Latino children to know that. So, in co-authorship, Alma Flor Ada and I created a plan to furnish young readers with tools that would help them choose their own identities as Latinos in the U.S. When we wrote books about Hispanic lands we talked about the expanded frontiers of our identity, no longer just México or Nicaragua, Cuba or Puerto Rico, but also Bolivia and Argentina, Chile and Uruguay, Spain and Honduras. We invited readers to meet poets born in all historic ages and all countries, from the Mayan A'Kabal to the Mexican Octavio Paz, Chilean Gabriela Mistral, or Spaniard Federico García Lorca; to read the biographies of Benito Juarez from Mexico and Fernando Botero from Colombia, José Martí from Cuba and our Latino César Chavez; and to broaden their horizon by inclusion of a second language, English, while  holding on proudly to their heritage language and all its richness. A few years ago, as a new generation of children was born to our families both in the U.S. and abroad, we realized that they would need a common past and we published books such as ˇPío Peep!, Mamá Goose, Merry Navidad, and Animal Nursery Rhymes. They are all bilingual books, because some of these children speak only English, others only Spanish, and we hope that they will master both languages sometime soon. As mothers of young Latino children wait in line at conferences for our signatures, they share that they want to keep the memory of their own mothers and the joy of their own childhood as contained in the pages of those nursery rhyme books.  Hopefully, they will sing to their children those same songs, and will teach them the games they played, and will realize that children can learn two languages simultaneously without much problem. This year, we have ventured into yet another recovery of common memory with the publication of Tales Our Abuelitas Told. The diversity of our origins is also manifested in the color of our skin, the language of our ancestors, the faith of our families. Many tales from the Hispanic folklore bring those attributes to light in characters, settings, and humor. We chose twelve stories that have crossed the boundaries of time and space to find a place in our common identity as Latinos. I am aware of the difficulties inherent in growing up Latino. Forty percent of Latino children under age seventeen is working full time jobs: not because they choose to do so, but because their families need them to do so. It is these young people who I wish would someday look at the pages of our books and find the strength to push themselves forward. Theirs is a very difficult reality but I believe in their honesty and their courage. I believe they deserve better. A pen seems to be a very fragile tool; however, it is the only one I have to help me dream and fight, work and hope, love and rebel. And it has served me well throughout the years to do exactly all that. Realizing the power of writing, Alma Flor Ada and I decided to share that power with others and wrote Authors in the Classroom: A Transformative Education Process. In those pages we invite readers to start paving their memory with short, simple words. “Who are you?” we ask, and the answers are poems that repeat in each line I AM, in an affirmation of self and life.  We propose to our readers that they write the Alphabet of their own lives, select photographs of someone important to them, and self-publish a book entitled "A Person in my Life" to give voice to the many silent heroes of our society. We guide them through a poem about "Where I Come From", asking them to begin each line of their poem with the words "I come from...these parents, I come from such foods, those landscapes, hopes, fears, tears."  I have done this work with thousands of teachers, students, and parents and I have never failed to be moved to tears, amazed by the power of their words. My brother Diego has patiently created for me a collection of over two hundred pens he has brought back from everywhere he goes. Now, friends also add to that collection, which I call my "Treasure Chest."  There is nothing more powerful than words and I hope that each one of us will have the strength to use our pen to tell the brave history of our humanity. We, Latinos, are just beginning to write that part of history.

To Order or to Ask a Del Sol Question, read the Del Sol Order Info and then email Rey Del Sol